The tributary of Battle Branch Stream was piped in the 1930s only to be daylighted in 2016. The process of turning the piped stream into a regenerative stormwater conveyance has taken nine years, starting in 2008 with the grant application to the N.C. Department of Environmental Quality (NCDEQ) and finishing with touches such as plantings and signage. The regenerative stormwater conveyance (RSC) is both a method of stormwater management and stream restoration that reduces flooding to the area, decreases stormwater runoff, increases biodiversity and increases stream health and water quality. UNC-Chapel Hill has partnered with NC State University for flow metering, rainfall measurement and water quality sampling for nutrients and total suspended solids. This site is the highest ranked water quality retrofit and the only daylighting opportunity on the UNC-Chapel Hill main campus.

Battle Grove is located south of McIver Residence Hall, east of the Coker Arboretum and west of Battle Park and Forest Theater. The site is within the Battle Branch watershed.

What is a Regenerative Stormwater Conveyance (RSC)?

An RSC is a method of stormwater control in which step pools are formed to have various positive effects on water and stream quality. For one, the step pools slow down water flow to allow some rainfall to seep back into the ground, replenishing the groundwater. Slowing the water also decreases the velocity with which it hits the streambanks, effectively reducing erosion and sediment turnover. The cobbles in between each pool also filter out sediment and excess nutrients that may have been carried off pavement with the runoff, improving water quality which, in turn, improves stream health.

Where Does the Stormwater Runoff Come From?

The project treats the runoff from 40 acres of UNC-Chapel Hill’s main campus. This watershed map shows the areas of campus whose runoff reaches the Battle Grove RSC site. 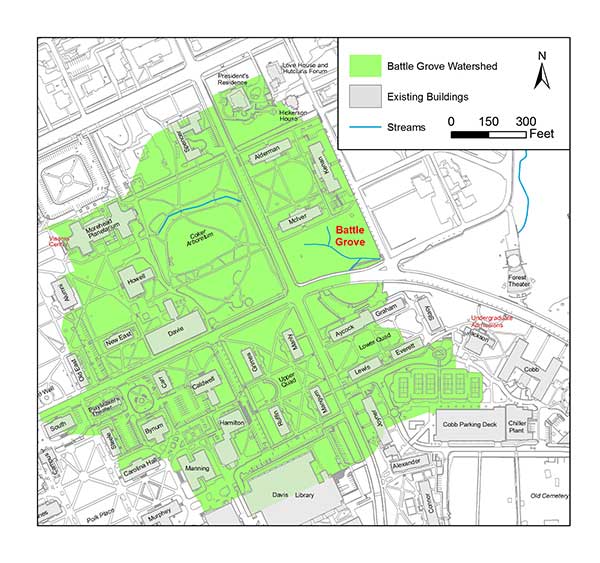 Battle Grove was first identified as a possible site for a restoration project in 2004. In 2015, UNC-Chapel Hill was awarded a 319 Grant from NCDEQ, which paid for approximately half of the construction cost. The remainder of the design and construction cost was funded by the UNC-Chapel Hill stormwater utility. In 2016, the existing pipe and channel were removed and the RSC was constructed. The plantings were completed in 2017.

What Plants are on the Site?

All of the plants used at the site are native to North Carolina and were selected based on their suitability for the hydrologic zone where they are placed. Below is a list of the trees and shrubs planted at the site.